“Agent Corsair is part of The Order, an ancient fellowship that’s been maintaining the relationship between the two sides of England; The modern world, and the ancient things that live in the shadows.

Assigned by his superiors to a low level missing persons case, Corsair is set to track down a local businessman who has been trying his hand at black magic. As he works the case more questions surface, and Corsair is forced to question his place in an increasingly modern world, because as well as having to live through ghosts and flesh eating horrors he has to survive the modernisation and monetisation of his ancient organisation. Expect noir style mystery, hideous monsters, ancient evil, and a different twist on a haunted house.”

I’ve been at this game long enough to know when someone is dialing it in.

I’ve read so many mainstream comics where you can just tell that the guy ( it’s usually a guy when this happens ) who is writing the script is bored as all hell but he just has to make the deadline.

I can also tell when this isn’t the case.

I can tell when someone LOVES what they are doing. In the case of Corsair I couldn’t be more convinced of Nick Gonzo’s passion for this project if I walked into a cheap motel and found him in bed with it.

This book has been researched as thoroughly as any comic I can remember reading in the past ten years. Chock-full of lore and tales of mystery from Yorkshire you could almost hear Kate Bush getting her Wuthering Heights on, on some Windswept Moor, as you read it.

Which I know is ridiculous given it’s a comic about Black Magic, but it just does. It’s so well written I believe every word of it.

Dialogue and just the way that the characters talk to each other feels real and genuine. The plot rattles along at a fair old pace while still making you tense while reading it. This book is as creepy as they come.

Magicanshouse does a fantastic job on the art here. Heavy use of shadow and thick almost luxurious inks are what help to carry the creepy vibe of the story to it’s full extent. Character design here is excellent. I love the old Johnny Cash vibe from Corsair. Easily he could have been young and beautiful, but this character has seen and done some shit in his career and the character design needs to reflect this. The Spirit- Eater is a triumph of disturbing imagery & the one character my mind keeps drifting back to. Corsair’s scenes with it genuinely set my teeth on edge. Wonderful splash pages used sparingly and to great effect. You’ll know the one captured my attention the most when you see it. Quick word on the backgrounds here. Magicianshouse has a great eye for detail – when it’s needed. Used to great effect in public places depicted in the book.

Alexa Renée is the MVP on this book. She carries off what I think might be just the best colouring job I’ve seen so far in an Indie book. Mood, lighting, tone are all bang on the money here and compliment the story perfectly. Some books are crying out to be coloured and Corsair wouldn’t be half the book it is without Renée’s Sterling job here. 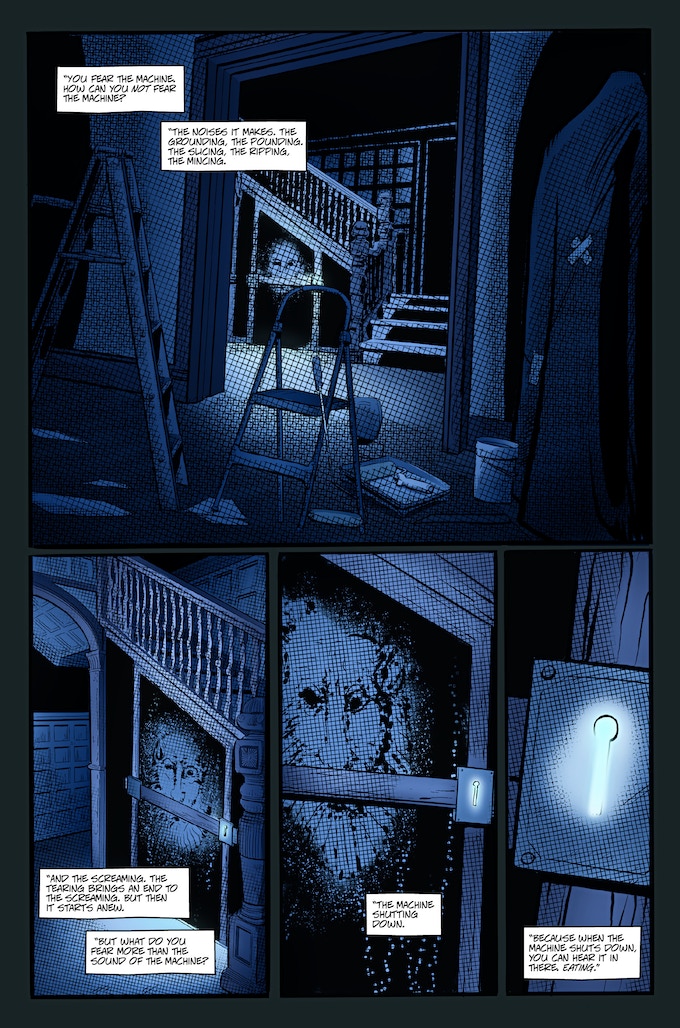 Rob Jones as usual knocks his lettering out of the park. Not a single balloon or box gets in the way of Magicianshouse’s art while looking as if it’s been produced by one of the Big Two’s letterers with 20 years of experience. A small press book without Jones work is doing itself a disservice.

People are going to want to compare Corsair to John Constantine – unfairly. The Character himself reminded me more of Warren Ellis’s Combat Magician William Gravel more than he did DC’s Hellblazer, but it’s a passing resemblance in the fact that both characters are British and combat black magic. The team on Corsair have created a character and a world that has countless possibilities for stories & all manner of creepy, disturbing monsters for their grizzled protagonist to battle.

Corsair is a beautifully researched book, taken to it’s full potential by a talented and invested team of creators. Best of all there’s more to come. Save your knobbliest, dribbliest candles for this one, you are gonna want to make sure the lights don’t go out when you are reading it.